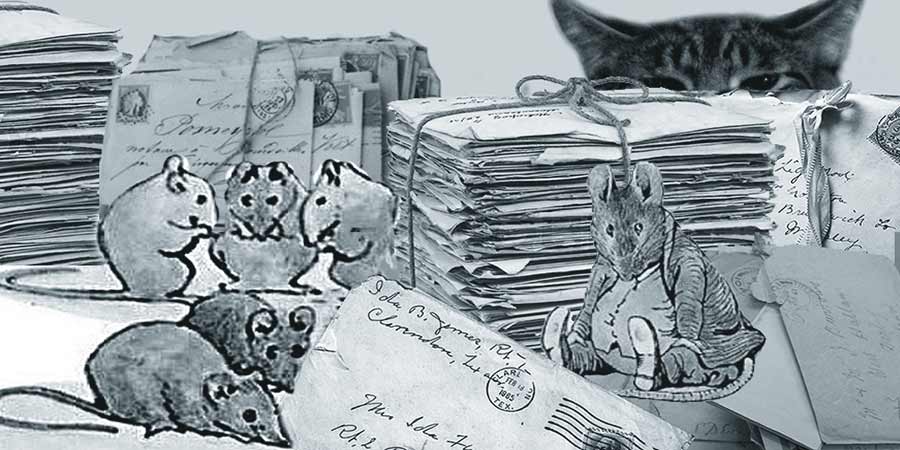 You got un-nibbled mail in the early days, because post office cats and ship’s cats dealt with the roving rodents. A bit of practical history from Able Sea-cat Bart, story curator of seafaring felines, the sailors’ pest controllers, shipmates, mascots and pets.

Her Majesty’s mails and dispatches

LONDON TIMES November 1838 — Steam vessels required for conveying Her Majesty’s Mails and Dispatches between England and Halifax, N.S., and also between England, Halifax and New York.

When the Royal Mail Ship Britannia swung out of Coburg dock in Liverpool on 4 July 1840 she carried 115 first class passengers, 89 crew, 600 tons of coal, the Atlantic mail (no doubt bearing the new Penny Black stamps that had gone on sale just two months earlier on 6 May), chickens, a cow to provide fresh milk and three cats to keep down the rats (and protect the mail). You can read more about the Penny Black here.

SYDNEY MORNING HERALD 20 April 1940 — The giant ships Queen Elizabeth, Queen Mary, and Mauretania are symbolic of a year of immense significance to ocean travel and to the Cunard White Star Line, for it will be a hundred years on July 4 since the first regular steamship service across the Atlantic commenced. On that date in 1840 the Cunard paddle steamer Britannia left Liverpool for Boston, carrying passengers, mails, and cargo.

In this age of luxurious and speedy sea travel it is hard to understand the opposition which this venture aroused. Shipowners in England at that time generally agreed that it would be economically impossible for steamers to cross the Atlantic owing to their large coal consumption! Critics instanced the case of the British ship Sirius, the first steam-driven vessel to cross the Atlantic without the aid of sails. She made the voyage from London to New York via Queenstown, in 1838, and consumed her whole supply of coal and some of her spars as well. Her crew, convinced that to cross the Atlantic under steam alone was madness, threatened to mutiny. The captain, Lieutenant Richard Roberts, RN, succeeded in restoring order, although firearms had to be used.

Samuel Cunard (later Sir Samuel), who came to England from Halifax in 1839, was not influenced by popular opinion. He was certain that the steam-driven ship would in time become the sailing vessel of the sea, and made extensive plans for the future in Halifax. Cunard had been agent for the East India Company. When he came to England to interest others in his scheme to run steamships across the Atlantic, he was introduced by the London secretary of the East India Company to two Scotsmen, Mr George Bums of Glasgow, and Mr David McIvor of Liverpool.

These hard-headed Scots agreed with Cunard that the era of the steam-driven vessel was at hand. Together they agreed to form a steamship company which was known as the British and North American Royal Mail Packet Company. Burns’ influence and efforts were mainly instrumental in raising the money. The company entered into an agreement with the British Government to commence a fortnightly summer service and a monthly winter service across the Atlantic with paddle steamers. The ports were Liverpool, Halifax, and Boston. The agreement carried an annual initial subsidy of £81,000. Four steamers were built for the service. They were the Britannia, Acadia, Columbia, and Caledonia. The maiden voyage was accomplished in 14 days eight hours, with an average speed of 8 knots. This was the first time that the mails had been carried between England and America by steamship. ◈

CREDIT Pigmy Forerunner of the Modern Giants by Illingworth Mackay

The best way to catch a rat

I am happy to admit we seafurrers can’t always deal with the rodent problem on our own. But generally speaking in times past there was no extermination system that could go through a ship’s maze-like infrastructure and do as efficient a job as we could – and simultaneously take care of disposal. There’s certainly a time and place for mechanical devices such as traps and chemical warfare like poison or gas (fumigation). But it’s a numbers game – the numbers of rodents and the availability of crew to deal with the matter. There’s also the question of side effects and extra staffing – someone has to set the traps, place the baits and clean up afterwards. Wily rats get to know the traps of course and bypass the baits which basically puts the ball back in the seafurrers’ court. We are the one stop shop when it comes to pest control and disposal. ◈ 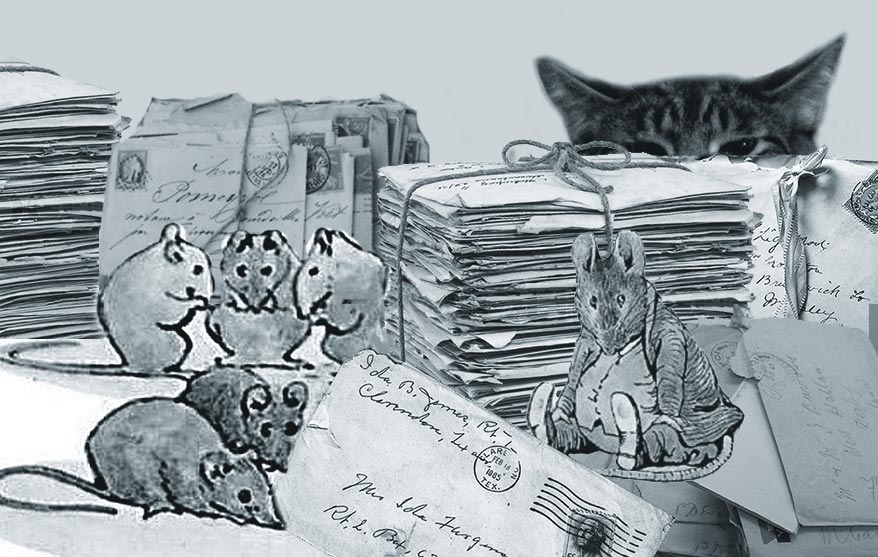 Letters, mail bags, stamps, documents and parcels (perishable foodstuffs like pork pies and wedding cake were often sent through the mail) were all were fair game for mice and rats in the post office, the depot, in transit or the ship’s hold. “Postmen are very conscientious people, and every time a letter was nibbled or a parcel munched, they felt they had somehow failed to maintain the standards the public demanded for the safe transmission of their mail. Traps and poison worked only up to a point; the presence of a cat on the premises was always regarded as the ultimate deterrent,” says Russell Ash, editor of Dear Cats, The Post Office Letters. Cats were first officially appointed by the Post Office to catch rodents in September 1868. A series of internal letters filed away on the British Post Office Archives (Minute No: 88560: Cats: Subsistence Allowance) explains how the appointment was initially made.

23 September 1868
The Controller, Money Order Office, London
To the Secretary of the Post Office

I beg to report that the very serious destruction and mutilation of the paid Money Orders stowed in the Registration Lockers of this Department have been brought about by mice: traps and other means have to no purpose been used for the riddance of these vermin, and I beg to state that I have requested the resident porter [James] Tye, to procure three cats for the purpose, and for the support of which he will be reimbursed.

I understand that 1½d [pence] per day is usually allowed at the [British] Museum and other places of the kind for each cat kept, and I propose that Tye be allowed 2/- [2 shillings] per week for the care and upkeep of these cats, which, if approved, can be defrayed by the surplus cash arising from money left at the windows of this department and unclaimed …

1869
The Secretary of the Post Office
To the Controller, Money Order Office, London

Three cats may be allowed on probation. They must undergo a test examination and should, I think, be females. It is important that the cats be not overfed and I cannot allow more than 1/- [1 shilling] a week for their support. They must depend on mice for the remainder of their emoluments and if the mice be not reduced in number in six months, a further portion of the allowance must be stopped. Can any statistics on mice be furnished from time to time?

6 May 1869
The Secretary of the Post Office
To the Controller, Money Order Office, London

How do the cats get on? Is it not time a report was made?

7 May 1869
The Controller, Money Order Office, London
To the Secretary of the Post Office

With reference to this inquiry after the cats by the Secretary, I am enabled to report that, whether influenced by the Secretary’s caution that they would under certain contingencies have diminished rations, or by laudable zeal for the Service and their own characters, cannot be clearly made out, but it is certain that the Cat System has answered exceedingly well and the cats have done their duty very efficiently, except as respects one point of the Secretary’s order (that they should all be female) which implied a probably increase in that portion of the Establishment.

You can read these letters and more in Dear Cats. ◈