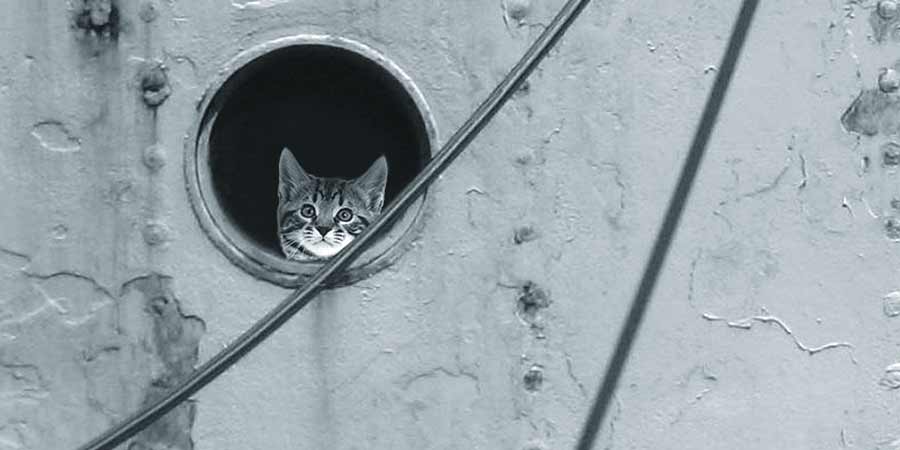 Watch Out is the story of a seafurrer whose vigilance and see-in-the-dark eyes were responsible for the ship avoiding an iceberg and safe arrival in Boston. Ships’ cats spot hazards their shipmates miss says Able Sea-cat Bart, story curator of seafaring felines, the sailors’ pest controllers, shipmates, mascots and pets.

Los Angeles Herald 28 June 1908 — Crew of freighter asserts feline’s vigilance was responsible for their safe arrival in port of Boston. A common black cat, with a bob tail, doglike ears and green eyes, saved the deeply laden British steamship Daltonhall from colliding with an iceberg off Cape Race. So at least say the crew of the ship, which is now berthed at Mystic wharf. The cat messes with the officers, which is another proof of the truth of the story. 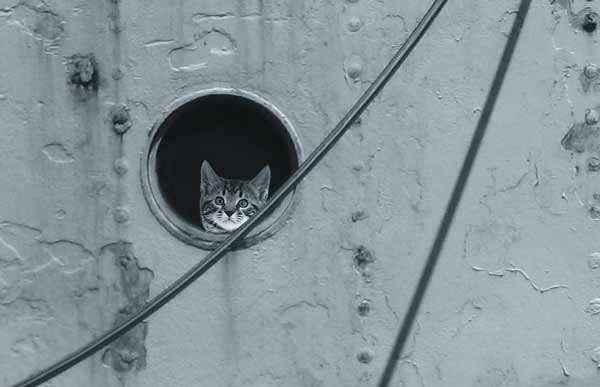 Three weeks ago when the Daltonhall was at Rotterdam, Queen Lil came aboard and proceeded to make herself at home. Instead of making a beeline for the galley, as a cat might be expected to do, she seemed more Interested in the engine room and the working of the telegraph, binnacle and steering gear. Indeed, the first thing Queen Lil did after boarding the ship was to make a tour of Inspection. Evidently all was satisfactory, for she started with the steamer for Boston. The freighter arrived in the ice region. The temperature had fallen end the water through which the ship was plowing was very cold. The cat was alert and so were the navigators. Her green eyes gleamed like coals and the doglike ears were cocked forward. She appeared to scent impending danger. The crew feared ice, and it was known the Daltonhall was hemmed by bergs and a collision might send her instantly to the bottom with all hands. The seamen watched the cat, and the cat kept close to the navigators, all that weary night when double lookouts became almost blind for the time being by straining ahead for glimpses of bergs. After a sleepless vigil dawn revealed four bergs close to the ship. They were huge and colored a beautiful pale green with clouds of shadowy vapor floating above their glistening pinnacles. To have struck one of these formidable barriers would have been the death of the stout steel ship. They feted the cat from Rotterdam. Condensed milk was fed her from a spoon in honor of the deliverance from the ice. ◈

Seeing in the dark

I’ve often been on watch keeping a weather eye open for rocks, reefs or shoals. I spot potential hazards my shipmates miss because I can see in near darkness. At night my eyes work six times better than their eyes do. Robert Juet makes a rather really telling point about our night vision differences in his journal (he accompanied Henry Hudson on several voyages).

“1609, August — The one and twentieth, was a sore storme of winde and rayne all day and all night, wherefore wee stood to the Eastward with a small sayle: till one of the clocke in the after-noone. Then a great Sea brake into our fore-corse (sail) and split it; so we were forced to take it from the yard and mend it; wee lay a trie with our mayne-corse all night. This night our Cat ranne crying from one syde of the ship to the other, looking over-boord, which made us to wonder; but we saw nothing.”

Seeing nothing doesn’t mean nothing was there. Who knows what that alert seafurrer saw or heard – our hearing range extends two octaves higher into the “ultrasound”. On this occasion, I can happily report the ship and her crew came to no harm and serendipity on side, sailed past Manhattan on September 3. They spent the next week or so exploring the Hudson as far as Albany. The rest is history. “New York, New York” indeed. One day I’ll tell you about the amazing oysters. ◈

Glow in the dark eyes

There’s a popular saying that cats can see in the dark, but it’s not entirely true. Not total darkness. But cats’ eyes are highly efficient at capturing whatever light is around at night. Here’s why.