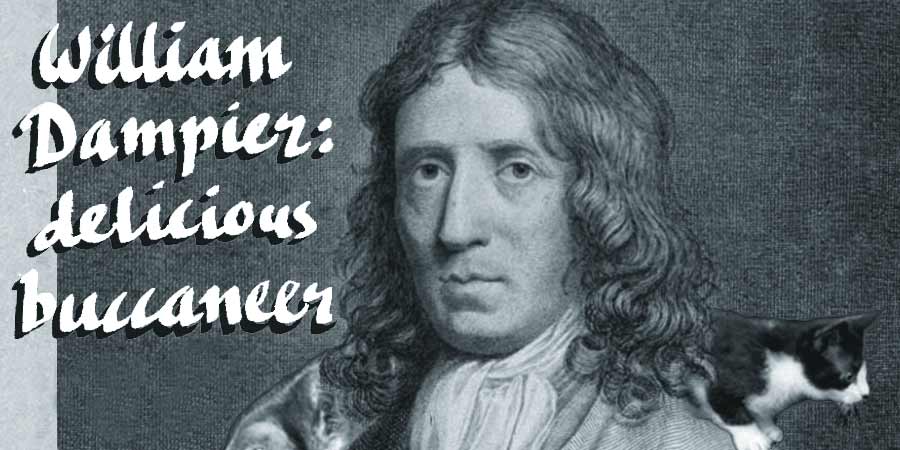 1697 — A New Voyage Round the World, William Dampier — We were two ships in company [setting out from Cape Corrientes for Guam 31 March 1686], Captain Swan’s ship [the Cygnet] and a bark commanded under Captain Swan by Captain Teat, and we were 150 men, 100 aboard of the ship, and 50 aboard the bark, besides slaves …    we had not sixty days’ provision, at a little more than half a pint of maize a day for each man, and no other provision except three meals of salted jew-fish; and we had a great many rats aboard, which we could not hinder from eating part of our maize … 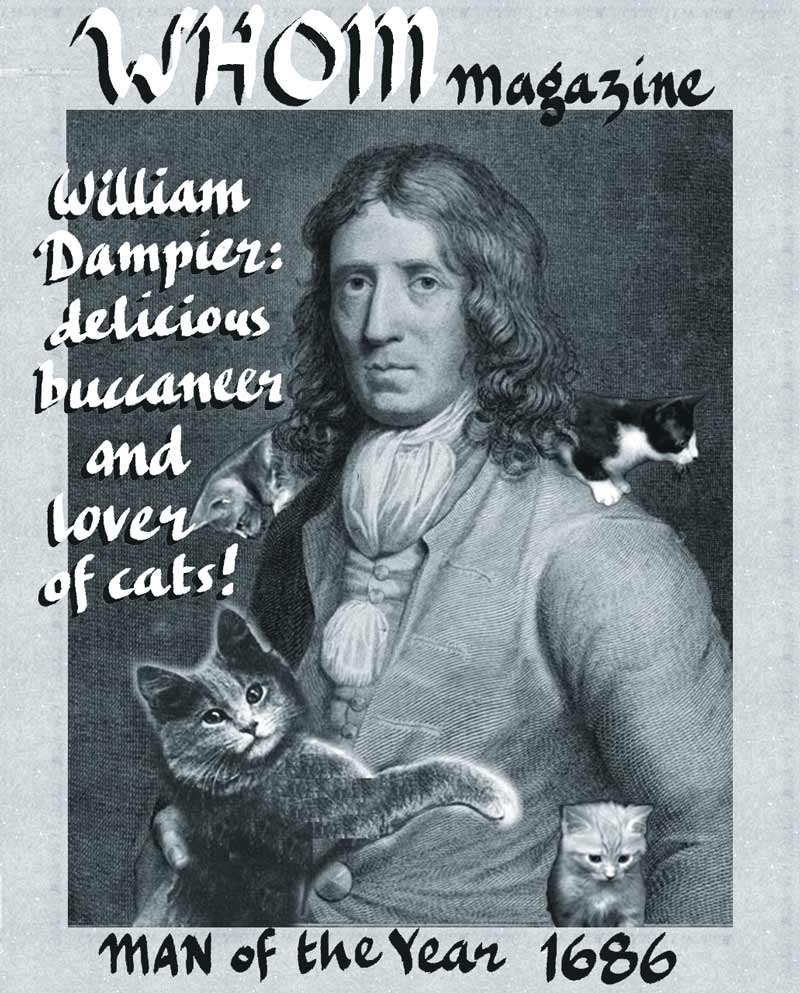 When we had eaten up our three meals of salted jew-fish in so many days’ time we had nothing but our small allowance of maize … There was not any occasion to call men to victuals for the kettle was boiled but once a day, which being made ready at noon, all hands were aloft to see the quartermaster share it, wherein he had need to be exact, having so many eyes to observe him. We had two dogs and two cats aboard, they likewise lived on what was given them, and waited with as much eagerness to see it shared as we did …

[After twenty days], our men seeing we had made such great runs and the wind like to continue, repined because they were kept at such short allowance. Captain Swan endeavoured to persuade them to have a little patience; yet nothing but an augmentation of their daily allowance would appease them. Captain Swan, though with much reluctance, gave way to a small enlargement of our commons, for now we had about ten spoonfuls of boiled maize a man, once a day, whereas before we had but eight: I do believe that this short allowance did me a great deal of good, though others were weakened by it; for I found that my strength increased and my dropsy wore off. Yet I drank three times every twenty-four hours; but many of our men did not drink in nine or ten days’ time and some not in twelve days; one of our men did not drink in seventeen days’ time, and said he was not adry when he did drink; yet he made water every day more or less. One of our men in the midst of these hardships was found guilty of theft, and condemned for the same to have three blows from each man in the ship, with a two inch and a half rope on his bare back. Captain Swan began first, and struck with a good will; whose example was followed by all of us.

The 20th day of May … at four o’clock, to our great joy, we saw the island Guam … It was well for Captain Swan that we got sight of it before our provision was spent, of which we had but enough for three days more; for, as I was afterwards informed, the men had contrived first to kill Captain Swan and eat him when the victuals was gone, and after him all of us who were accessory in promoting the undertaking this voyage. This made Captain Swan say to me after our arrival at Guam, “Ah! Dampier, you would have made them but a poor meal;” for I was as lean as the captain was lusty and fleshy. ◈

Eating people may be wrong, but I am not at all surprised a group of Very Hungry Buccaneers thought about making a meal of Captain Swan and William Dampier. Idle threat? Who knows with dwindling food supplies and no land in sight? A daily cup of maize boiled up with a bit of water isn’t much to keep a man going. And grumbling tums can turn into mutinous minds in no time. Just ask Henry Hudson. Back in 1611, he was cast adrift with his son and seven others when provisions ran low and his plans contrary to the crew’s. I’ll bet the Cygnet’s seafurrers didn’t go hungry however – they had all those rats Dampier complained about to top up their tanks. I am surprised the sailors didn’t tuck into them too.

About 150 years earlier when faced with appalling hardship and starvation, Magellan’s crew ate rats. I have heard sailors report that in a stew they taste rather like rabbit. ◈

Pirates of the Caribbean

Pirates terrorised shipping from day one, plundering, pillaging and murdering for rich pickings from gold to guns. They were speedily named maritime outlaws by the rules of the sea allowing the competent courts of any country to punish them appropriately – they were usually hanged in chains on prominent headlands as a warning to passing ships.

The golden age of the pirates, privateers and buccaneers of the Caribbean was from about 1650 to 1725. Though the distinguishing line between various piratical enterprises was often perilously thin and frequently crossed, there is a difference. Pirates, those who “take a ship on the high seas from the possession or control of those lawfully entitled to it,” plundered any nation’s ship. Privateers and buccaneers only plundered their nation’s enemy ships. In the Caribbean, Spain for a time was the enemy.

Privateers were privately owned ships issued with “letters of marque” (an official commission) that allowed them to capture merchant vessels in times of war without being charged with piracy. At war’s end however, many became pirates to continue enjoying the rich pickings as Charles Johnson says in A General History of the Robberies and Murders of the Most Notorious Pyrates (1724).

“Privateers of the West-Indies, where I have taken Notice they live upon Spoil; and as Custom is a second Nature, it is no Wonder that, when an honest Livlyhood is not easily had, they run into one so like their own; so that it may be said, that Privateers in Time of War are a Nursery for Pyrates against a Peace.”

Buccaneers were originally the men who lived by hunting wild cattle in Hispaniola, drying the meat in the Indian fashion and supplying British, French and Dutch ships trading in the area. (Boucan describes meat dried this way.) The name was then applied to the sea rovers (filibusters or free-booters) who attacked Spanish ships and colonies in the Caribbean and along the east and west coasts of the Americas with the partial support and/or blind eye of the British, French and Dutch.

We cruised off the cape till the first day of January 1686 and then made towards the valley Valderas to hunt for beef, and before night we anchored in the bottom of the bay in 60 fathom water a mile from the shore. Here we stayed hunting till the 7th day, and Captain Swan and Captain Townley went ashore every morning with about 240 men and marched to a small hill; where they remained with 50 or 60 men to watch the Spaniards, who appeared in great companies on other hills not far distant but did never attempt anything against our men. Here we killed and salted above two months’ meat besides what we spent fresh; and might have killed as much more if we had been better stored with salt. Our hopes of meeting the Philippine ship were now over; for we did all conclude that while we were necessitated to hunt here for provisions she was passed by to the eastward, as indeed she was, as we did understand afterwards by prisoners …

Hitherto we had coasted along here with two different designs; the one was to get the Manila ship, which would have enriched us beyond measure; and this Captain Townley was most for. Sir Thomas Cavendish formerly took the Manila ship off Cape San Lucas in California (where we also would have waited for her, had we been early enough stored with provisions, to have met her there) and threw much rich goods overboard. The other design, which Captain Swan and our crew were most for, was to search along the coast for rich towns and mines chiefly of gold and silver, which we were assured were in this country, and we hoped near the shore: not knowing (as we afterwards found) that it was in effect an inland country, its wealth remote from the South Sea coast and having little or no commerce with it, its trade being driven eastward with Europe by La Vera Cruz.

CREDIT A New Voyage Round the World, William Dampier (1697)
ILLUSTRATIONWoodcut of Stede Bonnet with a Jolly Roger in Charles Johnson’s A General History of the Pyrates (1725)