In Life’s Ups and Downs, Able Sea-cat Bart relates the story of Matthew Flinder’s Trim, the ship’s cat who found going aloft hard to resist. He found coming down more challenging as do all seafaring felines, the sailors’ pest controllers, shipmates, mascots and pets. But there were usually shipmates to assist.

“The replacing a top-mast carried away, or taking a reef in the sails were what most attracted his [Trim’s] attention at sea; and at all times when there was more bustle on deck than usual, he never failed to be present and in the midst of it; for as I have before hinted, he was endowed with an unusual degree of confidence and courage, and having never received anything good from men, he believed all to be his friends, and he was the friend of all.

When the nature of the bustle upon the deck was not understood by him, he would mew and rub his back up against the legs of one and another, frequently at the risk of being trampled underfoot, until he obtained the attention of someone to satisfy him. He knew what good discipline required, and on taking in a reef, never presumed to go aloft until the order was issued; but go as soon as the officer had issued the word – “Away up aloft!”

Up he jumped along with the seamen, and so active and zealous was he, that none could reach the top before, or so soon as he did. His zeal, however, never carried him beyond a sense of his dignity; he did not lay out on the yard like a common seaman, but always remained seated upon the cap, to inspect like an officer. This assumption of authority to which, it must be confessed, his rank, though great as a quadruped, did not entitle him amongst men, created no jealousy; for he always found some good friend to caress him after the business was done, and to take him down in his arms.” ◈

As Trim discovered, what goes up must come down

Ships’ cats find the exhilaration of going aloft hard to resist, and Matthew Flinder’s Trim (the world’s favourite ship’s cat who circumnavigated Australia) was no exception – as the scribe explained to Radio Pet Lady Tracie Hotchner.

Going up is a breeze; coming down less so. It’s essentially the claws problem – designed to shimmy up trees, fences, trellises, wooden power poles, carpet posts, and trouser legs, our claws curve towards the back rather like ‘built-in crampons’. Going up they do a great job; coming down it’s hard to get a grip as they point the wrong way. 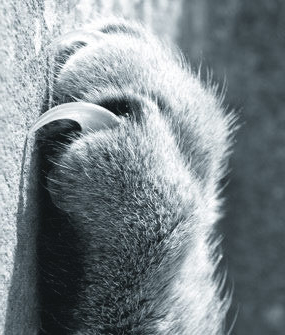 The savvy seafurrer has three options aloft – thoughtful head first, discreet backing down or hitching a ride with good friends as Trim preferred. The angle of the descent tends to be the decider for most seafurrers. Worst case scenario? Jumping. It isn’t always a “nine lives extreme challenge”. We make a perfect landing on all four paws. Mostly. ◈

Air righting: how cats fall on their feet

Aerial acrobatics always impress. But how cats turn mid-air and land on their feet totally intrigued scientists in the nineteenth century. “How could a free-falling body change its orientation such that it is able to right itself as it falls to land on its feet, irrespective of its initial orientation, and without violating the law of conservation of angular momentum” they asked. It seemed to defy Newtonian physics. 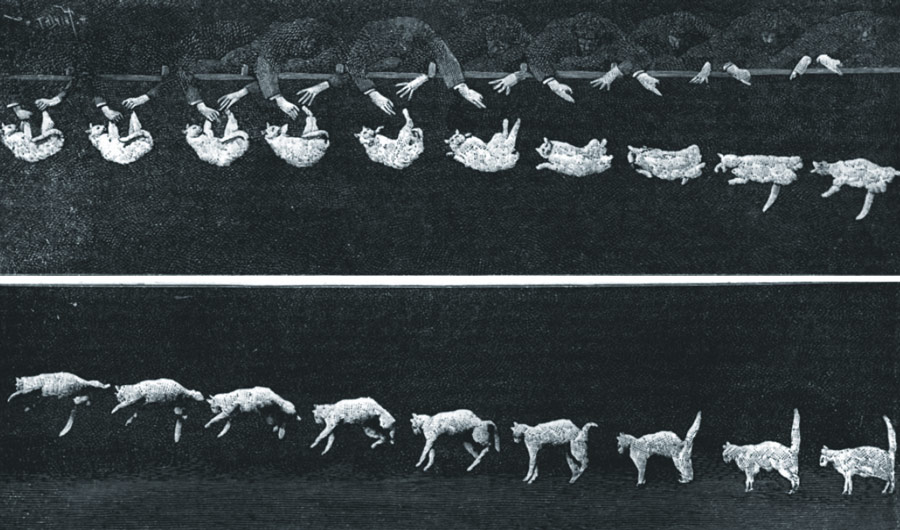 At Cambridge University in the 1850s they apparently adopted the highly unethical approach of dropping cats out of windows to find out according to James Clerk Maxwell who reported to his wife: “There is a tradition in Trinity that when I was here, I discovered a method of throwing a cat so as not to light on its feet, and that I used to throw cats out of windows. I had to explain that the proper object of research was to find how quick the cat would turn round, and that the proper method was to let the cat drop on a table or bed from about two inches, and that even then the cat lights on her feet.”

Maxwell may have been a bit of a genius and gone on to become one of the nineteenth century’s greatest theoretical physicists, but he never solved the “falling cat problem” – more a people problem of understanding than a cat problem unless it happened to meet a physicist.

In 1894, French scientist and photographer Étienne-Jules Marey showed how falling cats turn mid-air land on their feet in a series of images he captured at 12 frames per second on his chronophotographic gun and published in Nature. While he too was a cat thrower, at least it was not out of windows. He also made in 1894 what is probably the world’s first cat movie, Falling Cat.

“Circus acrobats and divers certainly do remarkable gyrations in mid-air, but most of these are almost certainly due to residual momentum from their take-off … The speed and agility with which a cat turns over is truly wonderful” reports Dr Donald McDonald, New Scientist (1960). Air righting is in fact an astonishingly complex reaction that occurs automatically. The aerial spin reflex appears in a kitten at three to four weeks and is perfected by seven weeks. Thanks to their vestibular apparatus in the inner ear that acts as a balance and orientation compass, cats always know right side up, and having a flexible backbone makes the mid-air turn possible. Here’s what happens.

“As it starts to fall, with its body upside-down, an automatic twisting action begins at the head end of the body. The head rotates first, until it is upright, then the front legs are brought up close to the face, ready to protect it from impact. (A blow to a cat’s chin from underneath can be particularly serious.) Next, the upper part of the spine is twisted, bringing the front half of the body round in line with the head. Finally, the hind legs are bent up so all four limbs are ready for touchdown and, as this happens the cat twists the rear half of its body round to catch up with the front. Finally, as it is about to make contact, it stretches all four legs out towards the ground and arches its back as a way or reducing the force of the impact. While this body-twisting is taking place, the stiffened tail is rotating like a propeller, acting as a counterbalancing device.” – Desmond Morris, Catwatching ◈