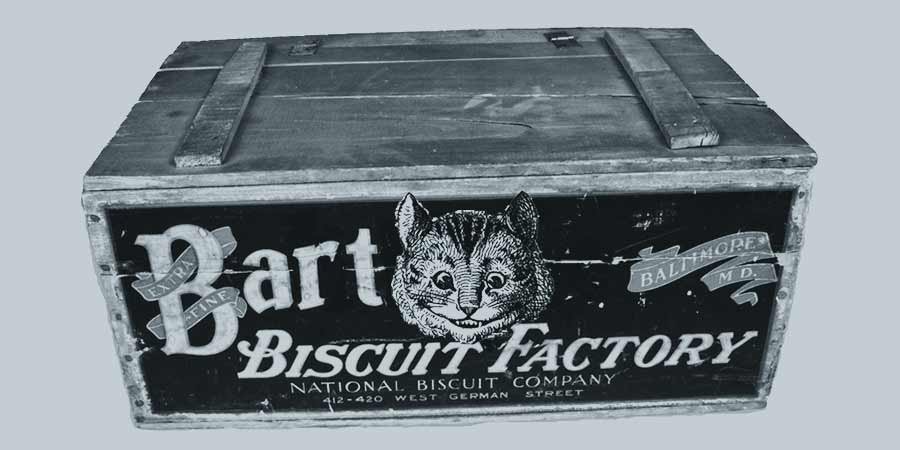 In Daily Bread Able Sea-cat Bart shares the experience of a ship’s cat torpedoed during the Battle of the Atlantic who survived on hardtack (and flying fish). Relive this World War II tale of survival from the story curator of seafaring felines, the sailors’ pest controllers, shipmates, mascots and pets.

A GULF COAST PORT, July 3, 1942 — A 17-year-old Massachusetts seaman came back from his first torpedoing with the story of the ship’s cat, which he saved. “We were in the lifeboat seven and a half days with not much to eat besides hardtack,” he said.“The cat didn’t like hardtack and wouldn’t eat a bite until some flying fish landed in the boat. Before we got to shore, she ate hardtack and liked it.’’ ◈ 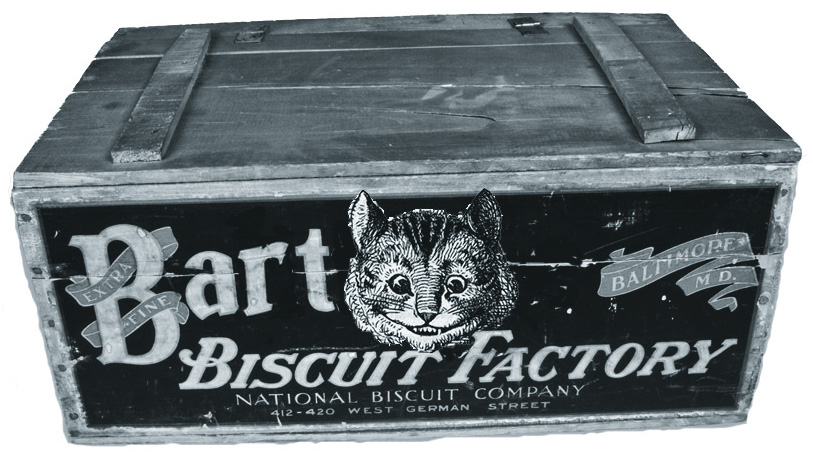 Saying “no thanks I’m paleo” or asking “is it gluten free” while bobbing about on the Atlantic waiting to be rescued is not a smart move in the survivor stakes. It was hardtack or hunger.

Hardtack or ship’s biscuit was the staple that sustained sailors. One of the earliest mentions is 1190, with the crusading Richard the Lionheart stocking his ships with “biskit of muslin” (mixed cornmeal made of barley, rye and bean flour). And until steam-powered steel ships and galleys with baking ovens, ship’s biscuit was a sailor’s daily bread. 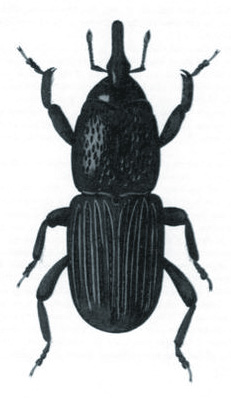 How much? Samuel Pepys’ table of Royal Navy rations (1677) allows each sailor “one pound daily of good, clean, sweet, sound, well-baked and well-conditioned wheaten biscuit (plus a galleon of beer and other victuals).” Weevils were a protein bonus. 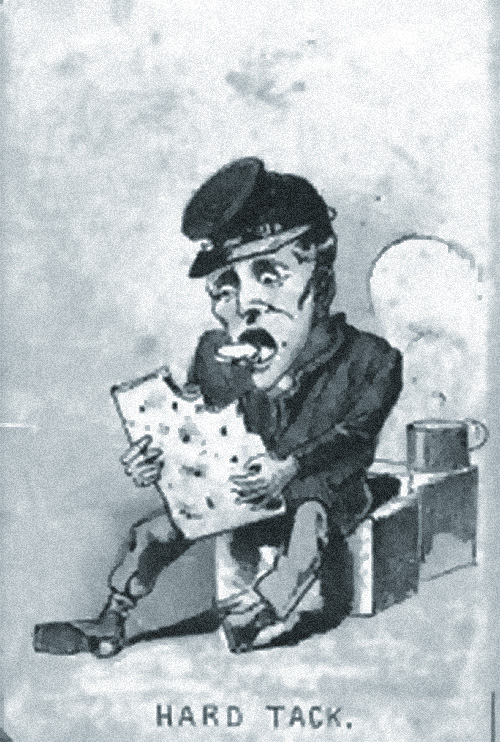 On its own, ship’s biscuit was a molar breaker. But it was often dunked in water or some liquid or added to salt beef stew or a seafood chowder which made it easier to eat. The lifeboat lad possibly improvised a grainy seafood salad to tempt puss’s tastebuds (and his own) by tossing crumbled hardtack with fresh flying fish flakes moistened with a little water.

Ginger Ninja, a bit of a kitchen whiz (especially at getting under foot), offers this modern-times, hardtack recipe. Use a coarsely ground flour, he says, to bake something approaching a typical, tooth-testing, eighteenth century tile. ◈ 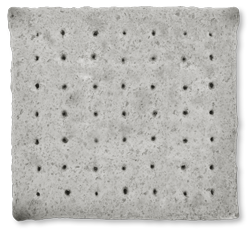 Method
Preheat oven to 175°C /350°F (fan-forced 155°C/325°F). Tip the flour and salt on to a work bench and make a hollow in the middle. Pour in the water and using your hands, roughly clump into a dough. It is a very stiff mixture. Use a rolling pin or meat mallet (and a strong arm) and beat the dough until it is about 1½cm (¾in) thickness. Fold and repeat several times. Cut the dough into squares about 5cm (2in) and place on an oven tray. Poke holes all over using a thick knitting needle or wooden skewer and bake for 30 minutes.

“BISCUIT, SEA, (biscuit, Fr.) is a sort of bread much dried, to make it keep for the use of the navy, and is good for a whole year after it is baked. 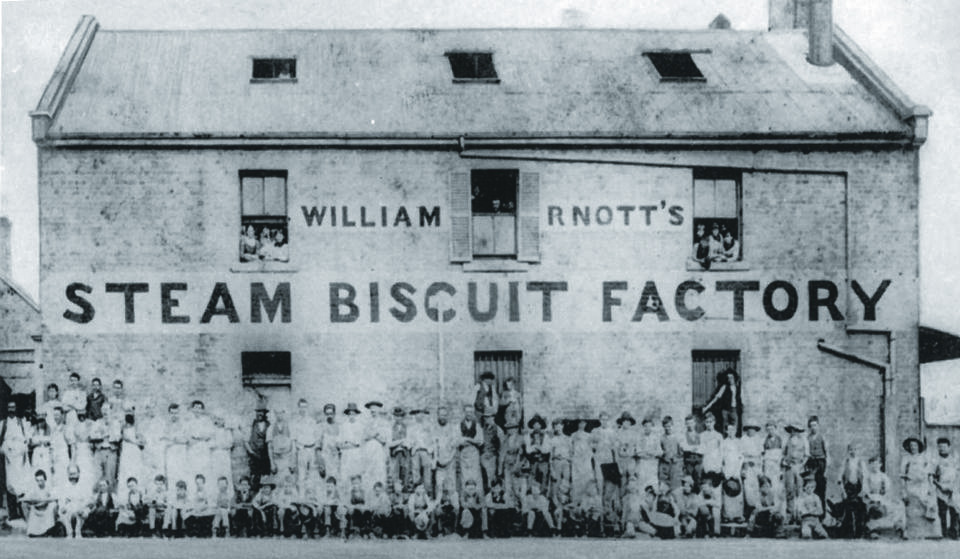 The process of biscuit-making for the navy is simple and ingenious, and is nearly as follows. A large lump of dough, consisting merely of flour and water, is mixed up together, and placed exactly in the centre of a raised platform, where a man sits upon a machine, called a horse, and literally rides up and down throughout its whole circular direction, till the dough is equally indented, and this is repeated till the dough is sufficiently kneaded. In this state it is handed over to a second workman, who, with a large knife, puts it in a proper state for the use of those bakers who more immediately attend the oven. They are five in number; and their different departments are well calculated for expedition and exactness. 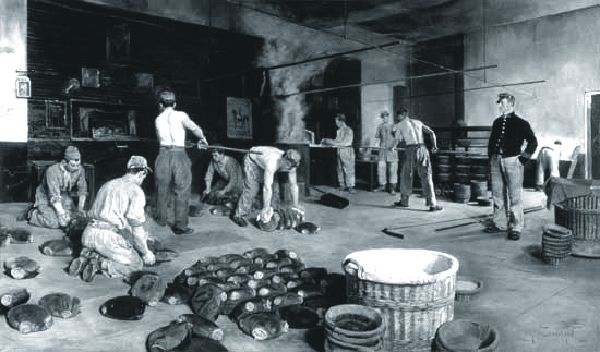 The first man on the farthest side of a large table moulds the dough, till it has the appearance of muffins, and which he does two together, with each hand; and then delivers them over to the man on the other side of the table, who stamps them on both sides with a mark, and throws them on a smaller table, where stands the third workman, whose business is merely to separate the different pieces into two, and place them under the hand of him who supplies the oven, whose work of throwing or chucking the biscuits on the peel must be performed with the greatest exactness and regularity. The fifth arranges them in the oven, and is so expert, that though the different biscuits are thrown to him at the rate of seventy in a minute, the peel is always disengaged in time to receive them separately.

So much critical exactness and neat activity occur in the exercise of this labour, that it is difficult to decide whether the palm of excellence is due to the moulder, the maker, the splitter, the chucker, or the depositor; all of them, like the wheels of a machine, seeming to be actuated by the same principle. The business is to deposit in the oven seventy biscuits in a minute; and this is accomplished with the regularity of a clock; the clack of the peel, during its motion in the oven, operating like the pendulum. The biscuits thus baked are kept in repositories, which receive warmth from being placed in drying lofts over the ovens, till they are sufficiently dry to be packed into bags, without danger of getting mouldy; and when in such a state, they are then packed into bags, of an hundred weight each, and removed into store-house for immediate use.

At Deptford the bake-house belonging to the victualling-office has twelve ovens; each of which bakes twenty shoots daily; the quantity of flour used for each shoot is two bushels, or 112 pounds; which baked, produce 102 pounds of biscuit. Ten pounds are regularly allowed on each shoot for shrinkage, &c. The allowance of biscuit in the navy is, one pound for each man per day; so that, at Deptford alone, they can furnish bread, daily, for 24,480 men, independent of Portsmouth and Plymouth.” ◈