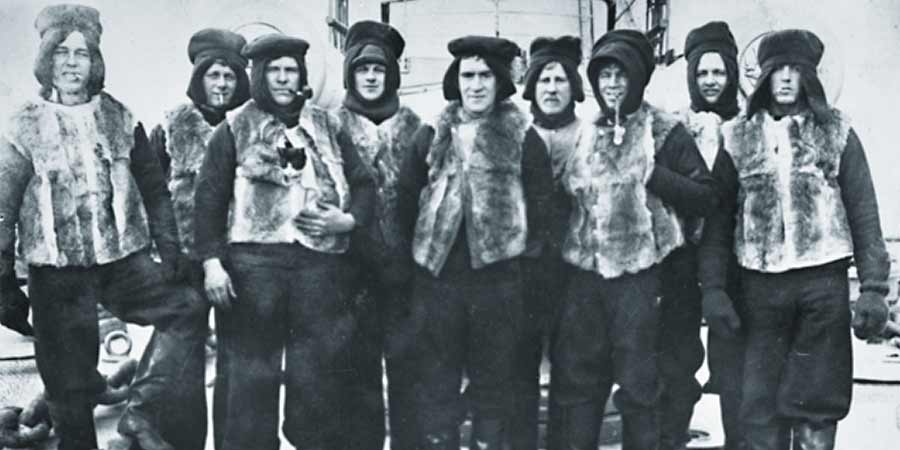 Able Sea-cat Bart looks at a war-time photograph in Warming Up showing the ship’s cat on HMAS Australia tucked in a shipmate’s vest. Seafaring felines, the sailors’ pest controllers, shipmates, mascots and pets, always had to be ready to perch on a shoulder or sit on a hat for photo opportunities.

Time: December 1916. Place: The North Sea. Action: Patrol and exercises — This is the time and place to be tucked in and that’s exactly what the ship’s cat of HMAS Australia is doing having been called on deck to line up for a photo opportunity in zero degree temperatures. 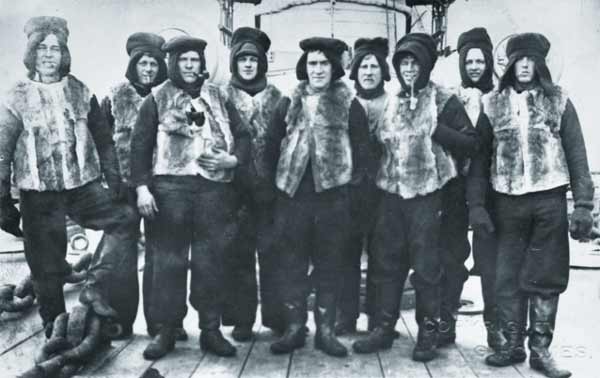 To weather the weather, the crew were kitted out in North Sea winter garb: vests, mittens and caps with ear flaps against the cold. No such kit was available for the cat who naturally made his (her?) own arrangements with his special shipmate to ensure he could stand the exposure and at the same time provide his shipmate with additional warmth and comfort. The black & white photograph taken by Clarence George Holmes’ was a glass original half plate negative.

Australia was the Australian Navy’s first flagship. With the outbreak of the First World War, she was the flagship of the force that captured the German colonies in the southern Pacific and was then deployed to the United Kingdom, sinking en route the German auxiliary Eleanore Woermann. On 8 February 1915 she became flagship of the 2nd Battle-cruiser Squadron of the Royal Navy’s Grand Fleet on patrol and exercises in the North Sea. She led the port column of the Grand Fleet at the surrender of the German High Seas Fleet in 1918. ◈

When temperatures plummet, living comfort (aka snuggling up) makes life a lot pleasanter. But the swaddling effect of being tucked into someone’s vest or jacket has never appealed to me. I guess I am not as sociable as the seafurrer pictured peeking out in the line-up. Close cooperation and support: yes. Close body contact: no. I am more of an end-of-the-bed spreader (like coz Silkie) where I can enjoy the comfort and warmth of heat transfer without being tied down – near but far and free to come and go. Clearly Nelson, Winston Churchill’s black cat was of similar mind, regularly curling up on the great man’s feet at the end of his bed as he worked. Nelson “does more for the war effort than you do” (Churchill advised his colleague Rab Butler, President of the Board of Education). “He acts as a hot water bottle and saves fuel and power.” To my mind, Nelson was playing an even more vital wartime role – ensuring Britain’s PM did not get cold feet. ◈

Myriad mascot photographs show a very sociable ship’s cat perched on a shoulder or sitting on a hat. Such seafurrers are clearly pets rather than pest controllers and have forged close bonds with chosen shipmates or a very special shipmate.

“Cats are not born attached to people; they’re born ready to learn how to attach themselves to people,” says Prof John Bradshaw in Cat Sense. He goes on to say that “kittens that don’t meet a human until the age of ten weeks or older are unlikely to become pets except in extreme circumstances”. So these very congenial cats would have come on board as very young kittens (or been born on board) as lots of handling by humans between four and eight weeks seems to be the key to a contented and sociable, lap-sitter. Nigger was “an almost invisible kitten” according the Dr Edward Wilson when he came aboard the Terra Nova in London for the British Antarctic Expedition led by Captain Robert Falcon Scott

Many seafurrers who became beloved pets and/or mascots were in fact born on board. Matthew Flinders’ cat Trim for example, was born on board HMS Reliance in 1799 en route to Botany Bay from the Cape of Good Hope. He circumnavigated the Australian mainland with Flinders in 1801–03 in HMS Investigator and survived the shipwreck of HMS Porpoise in 1803 on Wreck Reef. ◈