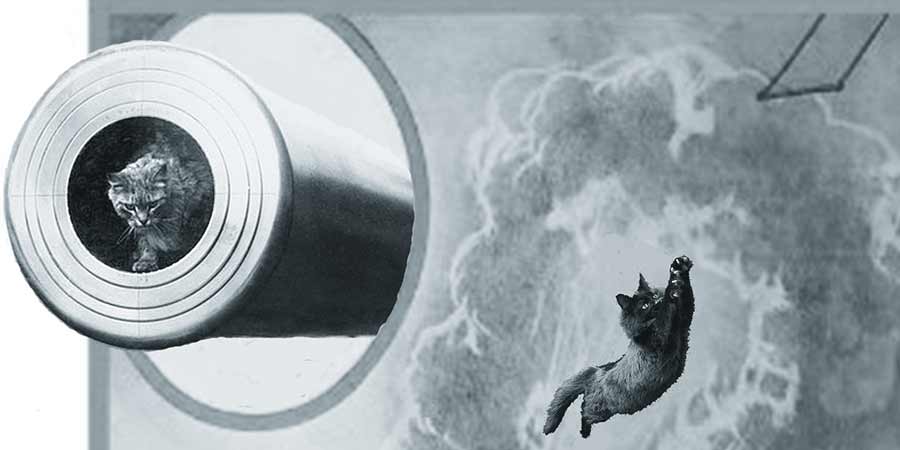 What happened to the ship’s cat? Able Sea-cat Bart revisits the sinking of USS Monitor during the American Civil War in Cannon Cat Cold Case. Was there a seafurrer on board or not the story curator of seafaring felines, the sailors’ pest controllers, shipmates, mascots and pets asks Dr Anna Holloway.

The loss of the Monitor by a survivor

“Bailing was now resumed. I occupied the turret all alone, and passed buckets from the lower hatchway to the man on the top of the turret. I took off my coat – one that I had received from home only a few days before (I could not feel that our noble little ship was yet lost) – and rolling it up with my boots, drew the tampion from one of the guns, placed them inside, and replaced the tampion.

“A black cat was sitting on the breech of one of the guns, howling one of those hoarse and solemn tunes which no one can appreciate who is not filled with superstitions which I had been taught by the sailors, who are always afraid to kill a cat. I would have almost as soon touched a ghost, but I caught her, and placing her in another gun, replaced the wad and tampion; but I could still hear that distressing howl. As I raised my last bucket to the upper hatchway no one was there to take it. I scrambled up the ladder and found that we below had been deserted. I shouted to those on the berth-deck, ‘Come up; the officers have left the ship, and a boat is alongside.’” ◈  —  Francis B. Butts

tampion
a wooden stopper for the muzzle of a gun also tompion
CREDIT Century Illustrated Monthly Magazine, December 1885.
Francis B. Butts was a lad of 18 learning the ropes as a landsman on the Monitor when he made his escape (he had joined up just a month before in November). He must have told his tale to family and friends countless times over the years before putting pen to paper to present his account of the Battle of Hampton Roads and the sinking of the Monitor to the Rhode Island Soldiers and Sailors Society (1878). Excerpts from his story were later printed in Century Illustrated Monthly Magazine.
ILLUSTRATION Ad Long

Sifting through the evidence

No self-respecting old tar ever lets the facts get in the way of a good story. Stretching the truth is entertaining. And Mr Butt’s ghoulish embellishment has all the signs of a well-practised yarn spun for an appreciative (but not faint-hearted) audience. I’m not saying the USS Monitor (the first ironclad warship commissioned by the Union Navy during the Civil War) didn’t have an able-bodied seafurrer on board but it’s worth keeping in mind that no accounts actually written at the time mention one. His account is published more than twenty years later. There were certainly rats on board. And over the summer of 1862 a portion of the iron deck was “converted into a stock yard containing just at present, one homesick lamb, one tough combative old ram, a consumptive calf, one fine lean swine, an antediluvian rooster & his mate, an old antiquated setting hen,” according to Paymaster William Keeler – a very reliable witness – writing to his wife. So why not a cat?

I think it’s highly likely there was a ship’s cat. Just not the wet, very agitated but seemingly compliant black one that didn’t object to Mr Butts singlehandedly stuffing it into a cannon with an 11-inch opening on a dark and stormy night on a sinking ship. But the curious case of the cat in the cannon is no longer a cold case. There’s new furrensic evidence to sift through. Sometimes what sinks eventually surfaces. That happened in 2002, when the Monitor’s 120-ton rotating turret which housed its two 11-inch-bore cannons was hoisted from its mid-Atlantic resting place. And that makes this an ongoing investigation. Now, we can look down the barrel.

The Reveal – this is where I butt out and hand over to the expert, marine historian Dr Anna Holloway. (Anna was formerly curator of the USS Monitor Center at The Mariners’ Museum for fourteen years before heading over to her new job at National Parks Service.)

“Even with just one account, we had to approach the excavation of the turret and guns with the knowledge not only that there might be human remains there (16 men went down with the vessel, and in fact, we found two sets of human remains in the turret), but there might also be a cat, boots and a coat (along with other personal artefacts). We did discover a wool sack coat and one full boot in the turret – though not in one of the guns. The tompions for both guns were not evident. Still, we excavated the bores of both guns quite carefully. No kitty cat has been found so far – either in the turret or in the guns. There is still a small amount of concretion in the guns back at the breech – so I suppose there is still a minuscule chance that cat bones could be found. So we keep looking because there’s nothing ironclad about this case yet.”  ◈

“Designed by Swedish-American engineer John Ericsson, when it was constructed, the USS Monitor represented a radical departure from traditional warship design. This Union vessel was powered by steam alone and was the first American warship with no masts and sails. With barely more than one foot of her deck visible, all machinery, storage, working, and berthing areas were below the water line.

“The vessel was constructed almost exclusively of iron and was heavily armored. A five-foot high, six-inch thick armor belt encircled the vessel at the water line for protection during battle. Perhaps the ship’s most novel feature was its revolving turret. Located near the middle of the ship, it was 9 feet high, 22 feet in diameter, and housed two 11-inch Dahlgren smoothbore cannon.

“The Monitor was launched from Continental Iron Works, Greenpoint, Long Island (New York City) on January 30, 1862. Less than two months later, she encountered the larger and more heavily armed Confederate ironclad, Virginia, in the famous Battle of Hampton Roads. While neither ship suffered much damage during the battle, their fight marked the first time iron ships clashed in naval warfare and signalled the end of the era of wooden warships.

“Shortly after midnight on December 31, 1862, while being towed by the USS Rhode Island to Beaufort, North Carolina, the Monitor sank in a gale off Cape Hatteras.

“For more than a century, the resting place of the USS Monitor remained undiscovered. Then, in August 1973, scientists aboard Duke University’s research vessel Eastward finally located the Monitor. In 1975, its final resting place was designated as the United States first national marine sanctuary.” ◈