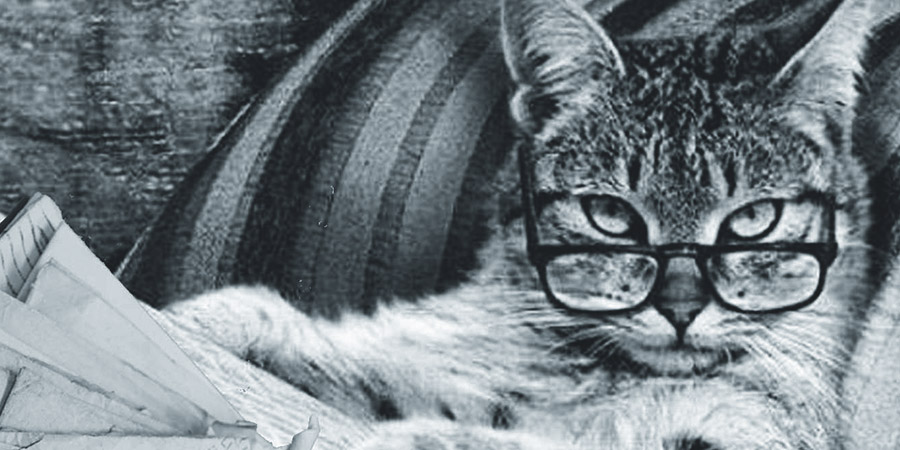 Ships’ cats discovered rodents are big paper fans when Sam Cunard’s Britannia carried the Royal Mail says Able Sea-cat Bart with the inside story on negotiations for an allowance for post office cats and a tale of mice and manuscripts. 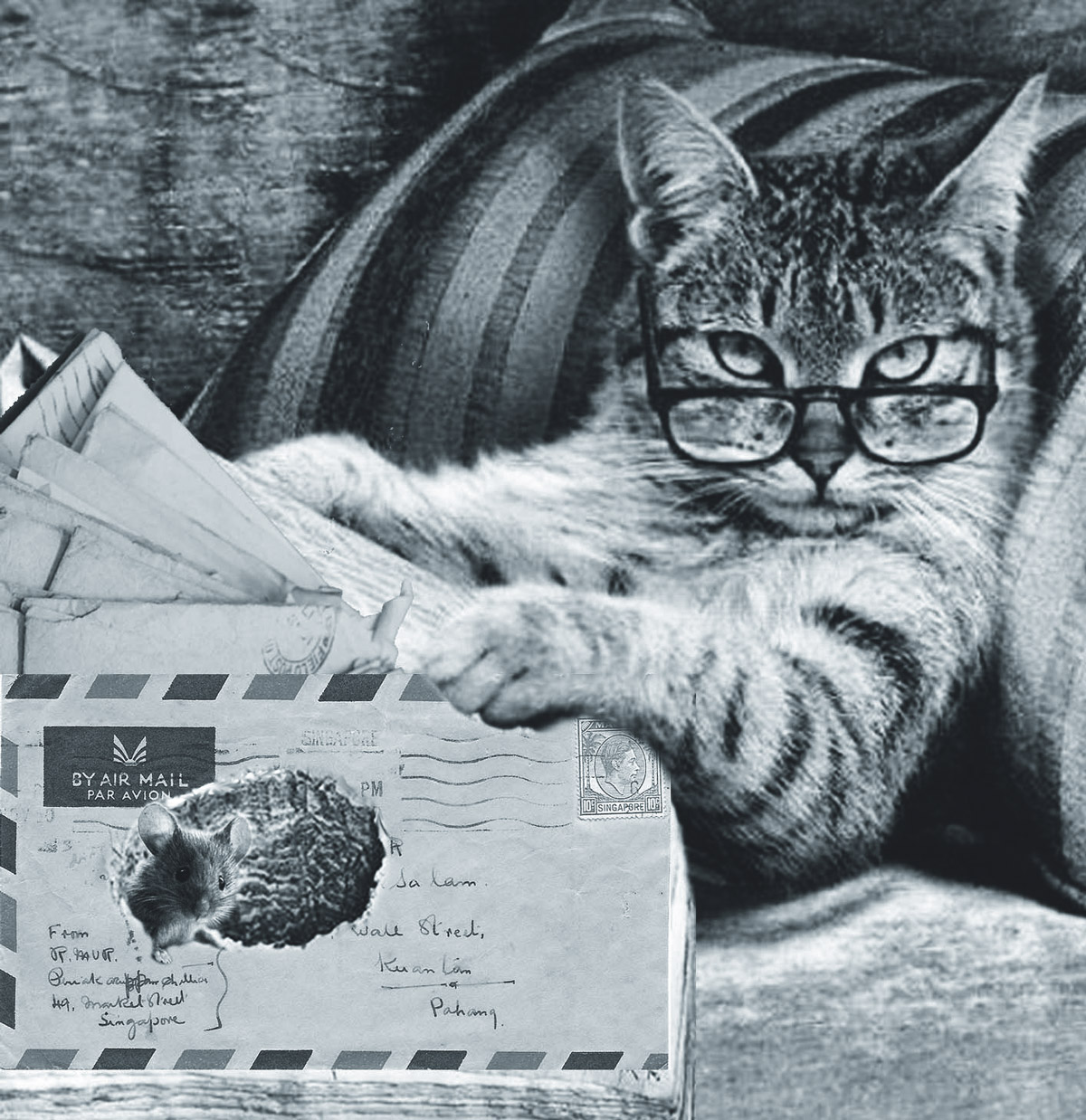 Our sack store where the outward Australian mail is kept has become infested with rats and they have begun to injure the correspondence. The Dock Authorities have been spoken to and they state a cat must be kept in the store. This will be attended with a slight expense and I submit that our Foreign Mail Guard [James] Wadman, who is stationed here, and who attends the store, may have a small allowance granted to him to pay that expense.

Ships’ cats shouldered additional postal pest control duties when RMS Britannia swung out of Coburg dock, Liverpool, on July 4, 1840 on her maiden voyage. On board were 115 first class passengers, 89 crew, 600 tons of coal, the Atlantic mail, chickens, a cow for fresh milk and three trusty seafurrers to deal with the rats. Britannia’s crossing to Halifax, Nova Scotia, in 12 days 10 hours was a game changer. It was the birth of the regular shipping schedule for mail deliveries and passengers. Charles Dickens was an early adopter, embarking on Britannia January 3, 1842 for his American tour.

When Samuel Cunard’s paddle steamers carried the Royal Mail, seafaring felines discovered what monastery cats had long known – rodents don’t just “injure correspondence”; they chew, shred and devour it. Seafurrers made sure the mail was delivered postmarked but not tooth marked. Ours was a free service; post office cats got paid because they had negotiators who wrangled a weekly pittance for them. The ins and outs of the penny-pinching deal are revealed thanks to Russell Ash, who mined the archives and shared the details in his tell-all Dear Cats, the Post Office Letters.  ◈

26 April 1873
The Surveyor, Southampton
to the Secretary of the Post Office

I beg to submit that an allowance of 1/9d a week will be allowed for the keep of a cat in the store house for the mail at the Docks at Southampton.

28 April 1873
The Secretary of the Post Office
to the Surveyor, Southampton

That seems a good deal to pay for a cat who is to do much in the “rat killing’ way. In London, from 6d to 9d a week is believed to be the usual allowance for a cat’s board and wages, varying accordingly to the supply or rats or mice. Is there any reason why more should be paid at Southampton?

26 April 1873
The Surveyor, Southampton
To the Secretary of the Post Office

I have instructed the Postmaster accordingly, and will make the amount as small as possible: but Mr. Wadman, the Guard, whose duty it will be to look after the cat, argues that such a sum as 6d or 9d would be quite insufficient. He says no nourishment whatever can be derived from rats which reside in the Post Office Store Room; that picking such rats, fed as they are on nothing but mail bags, is no better than picking oakum; besides, he very properly points out, the wear and tear of shoe leather in going to and fro will cost at least one-fourth of the proposed allowance, and that whatever small balance there may be left over after paying these expenses will not be more than sufficient to compensate him for the loss of dignity in carrying cats’ food through the streets in Her Majesty’s uniform.

Q+A
What would nine pence buy in 1873?
A “quartern” loaf of bread is a loaf weighing 4lb 15oz before baking according to 1822’s London Bread Act.  A very general pre-bake and post bake weight loss rule of thumb is 10–20%.

Medieval manuscripts offered a tasty treat for rats and mice, as this eleventh-century copy of Boethius’s De consolatione philosophiae illustrates. The manuscript has been all but devoured by them and every page shows the marks of their teeth. 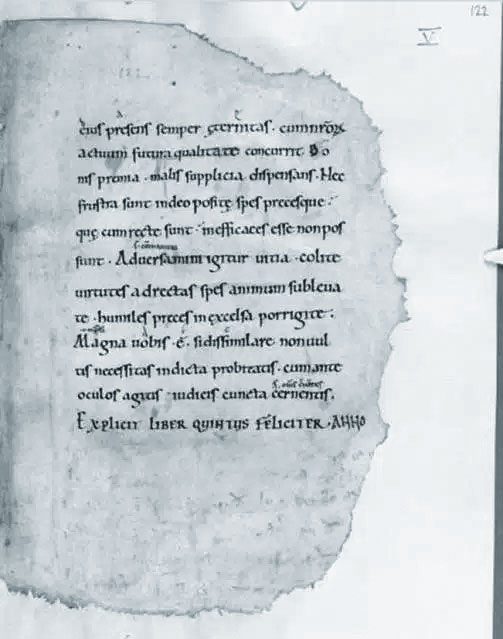 Aside from their book-endangering eating habits, mice could be an annoying distraction, as illustrated by the twelfth-century scribe Hildebert. The illustration shows how a mouse has climbed up Hildebert’s table and is eating his cheese. Hildebert lifts a stone in an apparent attempt to kill the mouse. In the book that he was writing, we find a curse directed at the cheese-nibbling beast: 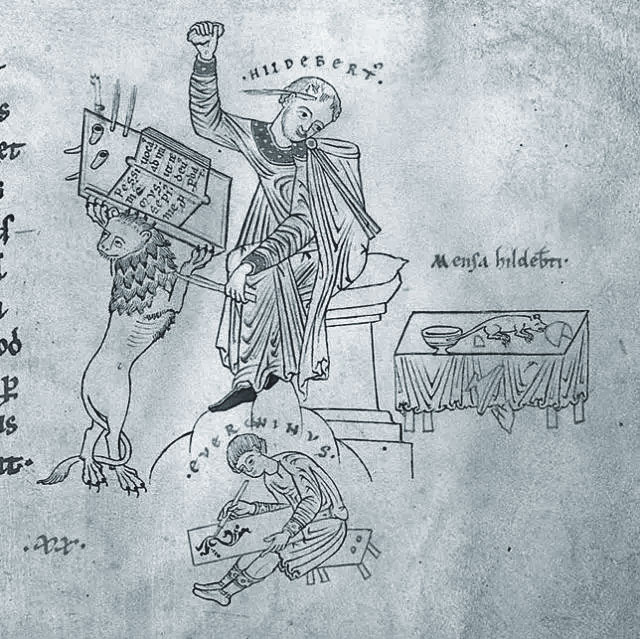 Cats played a key role in medieval libraries as this ninth-century poem, written by an Irish monk about his cat “Pangur Bán”, explains.

I and Pangur Bán my cat,
‘Tis a like task we are at:
Hunting mice is his delight,
Hunting words I sit all night.

Sometimes solutions introduce new problems. Everyone who has ever owned a cat will be familiar with their unmannerly feline habit of walking across your keyboard while you are typing. One of the manuscript pictures tweeted by @erik_kwakkel revealed that this is nothing new. 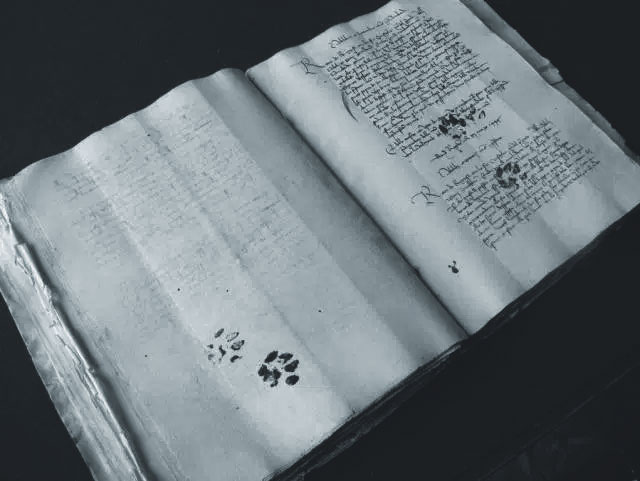 Although the medieval owner of this manuscript may have been quite annoyed with these paw marks on his otherwise neat manuscript, another fifteenth-century manuscript reveals that he got off lucky.  A Deventer scribe, writing around 1420, found his manuscript ruined by a urine stain left there by a cat the night before. He was forced to leave the rest of the page empty, drew a picture of a cat and cursed the creature with the following words:

Hic non defectus est, sed cattus minxit desuper nocte quadam. Confundatur pessimus cattus qui minxit super librum istum in nocte Daventrie, et consimiliter omnes alii propter illum. Et cavendum valde ne permittantur libri aperti per noctem ubi cattie venire possunt.
Here is nothing missing, but a cat urinated on this during a certain night. Cursed be the pesty cat that urinated over this book during the night in Deventer and because of it many others [other cats] too. And beware well not to leave open books at night where cats can come. 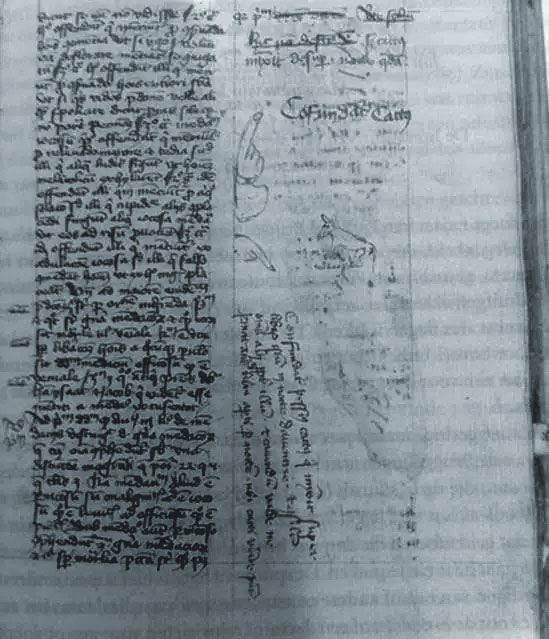 So, while at least two cats are responsible for leaving their unwanted marks on manuscripts, the cat’s mouse-catching abilities may have saved a large number of manuscripts from ending up in a mouse’s belly and may have enabled many a scribe to focus on his work, knowing that his lunch would remain untouched. ◈