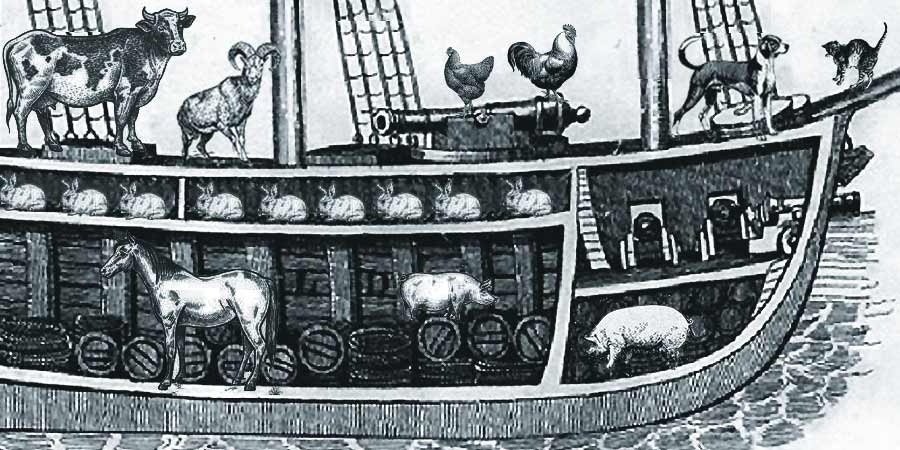 Nelson’s floating menagerie made room for one more after Trafalgar, the cat rescued from the sinking Santissima Trinidad. Able Sea-cat Bart shares another tale of seafaring felines, the sailors’ pest controllers, shipmates, mascots and pets.

The consolation of pets

“Considering the livestock that was carried to provide fresh food during a voyage, some of which roamed freely through the ship, to which were added sailors’ pets of all descriptions, warships must at times have resembled floating menageries …

“When researching our book Jack Tar, we looked very hard for good stories connected to cats in Nelson’s navy. We found numerous stories of dogs, monkeys and parrots and pigs but apart from Captain Fremantle’s kitten, there were no decent stories of cats as pets or pest killers. Which is very interesting, because it implies either that on board British naval ships, cats were not common as a means of controlling vermin or as pets, or that they were so common that nobody thought of referring to them. Certainly, in the long absences from home, sailors found some consolation in their pets. The officers frequently had dogs, which were sometimes the spoils of war, while the lower-deck seamen tended to opt for monkeys and parrots.” ◈

1785 — “The Admiral having given permission for any person that pleased to take home a dog, 75 were actually embarked … I messed in the main hatchway berth on the lower deck, with four midshipmen and a scribe. We had eight of those dogs billeted on us.” ◈

1806 — “My pug dog [rescued from the Santissima Trinidad after the Battle of Trafalgar, October 1805] is called Nympha … and is a great favourite. She sleeps in the bed with me and is solaced every morning from the warm blankets into a large tub of cold water, this keeps her clear of fleas, and she is at this instant worrying an unfortunate kitten that is her companion. I mean to buy a parrot at Gibraltar and perhaps a monkey to amuse myself.” ◈

1809 — “You will be sorry to hear my poor dog Bounce is dead. I am afraid he fell overboard in the night. He is a great loss to me. I have few comforts, but he was one, for he loved me. Everybody sorrows for him. He was wiser than [many] who hold their heads higher and was grateful [to those] who were kind to him.” ◈

CREDIT Letter from Admiral Lord Collingwood to his sister.

Gone to the dogs?

Well the Brits have always been very fond of their dogs. And while we seafurrers may not rate a mention in Nelson’s navy, we were there, quietly and tirelessly doing our bit. The ships were full of rats, so it was full-time work. At times the infestation was so great, young ratings would dangle a hook and line down a hatchway fishing for rats. Not that these lads caught anything. I assume they did this more for entertainment and to pass the time rather than as a serious attempt at pest control, because there were plenty left for us to deal with.

Generally, the animals in Nelson’s ships were provisions or pets. Provisions is not a category you’d volunteer for. Pets play an important distracting and entertaining role on board however, because life on a battle ship back then could be very boring (more blockade than battle) with one day merging into another. “A life of misery and ennui” said Fremantle to his wife Betsey describing the blockade of Cadiz.

Incidentally, a cat was rescued from the Spanish ship, Santissima Trinidad, which the captains of the Prince and Neptune cleared and sank. There’s a report from the Ajax’s lieutenant (I’d hazard a guess that would be First Lieutenant John Pilfold who was in command during the Battle of Trafalgar) that: “Everything alive was taken out down to the ship’s cat.” His boat was the last to leave and the story goes they had put off from the starboard quarter when a cat, the only living animal aboard, ran out on the muzzle of one of the lower-deck guns and by a plaintive mew seemed to beg for assistance: the boat returned and took her in. ◈

“We had live stock on board of every kind, in abundance: bullocks, pigs, sheep, goats, geese, ducks, turkeys, chickens &c many of these creatures becoming domesticated, were spared the general slaughter, and had names given to them by the Tars, there was Billy the goat,; Jenny the cow; Tom, the sheep; Jack, the goose:’ and many others, which I shall not mention; Jenny the cow, after being two years on board, ran dry, and therefore, was killed … poor Tom the sheep was killed by lightning.” ◈

“At the start of a voyage, a ship sounded and smelled like a farmyard, with animals stowed in odd corners of the decks and their fodder crammed in every available space and they had to be looked after and fed and the decks scrubbed clean every morning. Heading into battle, the ship would be cleared for action. Goats, sheep, chickens, pigs and even cows were stowed in boats towed behind the warships, but if time was short the animals might be thrown overboard to fend for themselves. At the Battle of the Nile, when the British Fleet sailed straight into the attack as soon as the French ships were sighted, the logbook of HMS Zealous records: ‘Cleared ship for action, and hove overboard ten bullocks’.” ◈