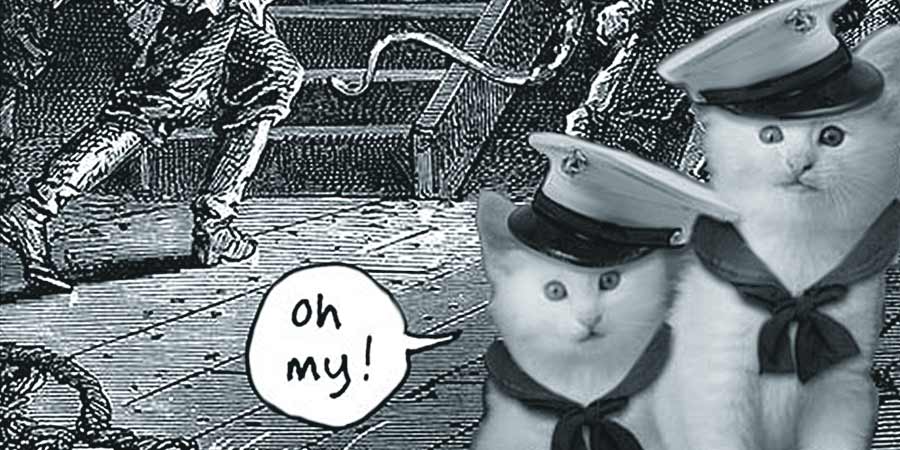 In Mysteries of the Deep, Able Sea-cat Bart explains how and why squid fly and occasionally land on deck, seemingly delivering a “heaven-sent” feast. Tuck into this palate pleasing culinary tale of seafaring felines, the sailors’ pest controllers, shipmates, mascots and pets.

San Francisco Call 9 August 1904 — “The liner Ventura on her outward voyage, when between this port and Honolulu, passed through a shower of squid, which delighted the ship’s cat and puzzled everybody else. 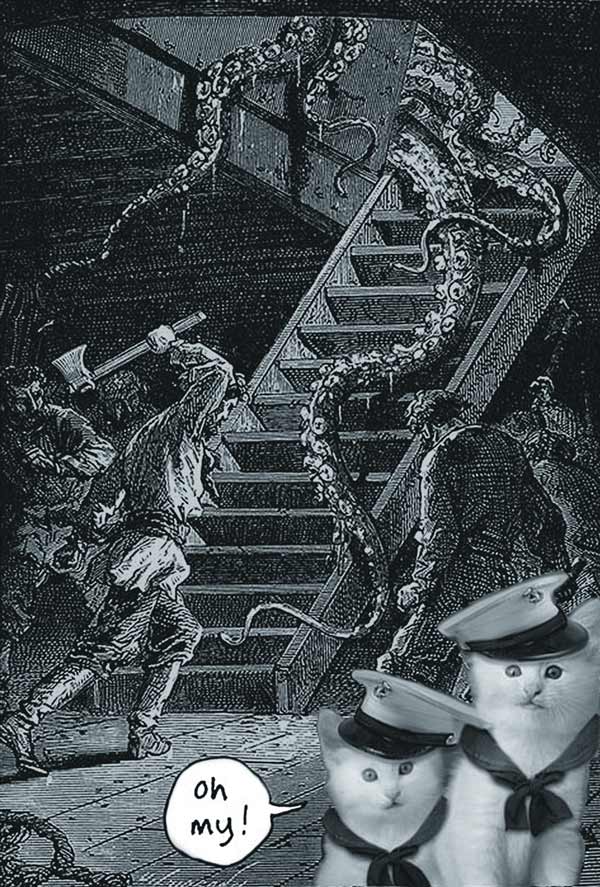 Dr. Clarke, the liner’s surgeon, vouches for the story, and volunteers the information that the wingless, finless, piscatorial curiosities must have been lifted from the ocean in a waterspout and traveled to the Ventura’s deck in a shower of rain. In proof of his story he has two of the fish preserved in a bottle.

Professor J. E. Deuriden of Ann Arbor University, who was a passenger, corroborated Surgeon Clarke’s diagnosis as to the family the fish represented. They can neither jump nor fly, he says, and as the sea was smooth, their presence on deck was a “mystery”. Then Dr. Clarke volunteered the waterspout theory.

It was the ship’s cat that discovered the squid. She was on deck for an early morning constitutional. Suddenly from the sky came a mess of fresh fish, all alive. The first squid the cat tackled squirted an ink-like fluid in the feline’s face, and for a while this fountain-pen feature of the heaven-sent meal mystified puss.

When discovered by a sailor, the cat had put away with all but half a dozen of the squid. Her face was stained with the dark-hued fluid with which each squid was plentifully supplied, but she was having the feast of her life, and, anyway, had learned early in life how to wash herself.” ◈

I keep an open mind about the mysteries of the deep. Say it can’t happen, it does. Take giant squid for example. They aren’t seen often, but they do exist and are the stuff of nightmares though Jules Verne was exaggerating their deadly dangers having one carry off a member of the crew and do him in. As for flying squid. The prof was one hundred per cent wrong. Some squid can fly (not giant ones fortunately). Off the coast of Australia, I once saw skipjack tuna chasing hundreds of arrow squid (Nototodarus gouldi). The shoal rocketed out of the ocean with fins extended and tentacles flared, and they flew through the air spurting jets of water behind them. They did this time and again to escape. It was an amazing sight and the crew lined the rails to watch. But I will concede that sightings are rare. And it’s even rarer for them to thump down on deck. When they do of course there’s a rush from the galley and cook makes off with the spoils to whip up a stew with tinned tomatoes and garlic. Maybe a bit of chilli. It smells good but I say no thanks as cephalopods are an eating challenge for me. I can’t get them down. It’s not the ink. It’s the slippery, rubbery texture. I like a bit of chew in my food. It’s a different story salt and pepper crispy pan fried. ◈

How do squid fly? The same way they swim – squirting water out of their mantles, but instead of shooting off after their catch, they shoot out of the water and fly about three metres above the waves. Scientific American clearly explains what’s going on. “First, a squid expands its mantle—the cloak of soft muscular tissue that surrounds its body—which fills with water. Then the squid quickly contracts it to send the trapped water shooting through a flexible tube below its head, called the funnel or siphon. By changing the position of this funnel, a squid can propel itself in almost any direction. Underwater, squid use jet propulsion to pounce on swift prey and escape intimidating predators. But sometimes jetting through the currents is not enough to make a successful getaway – sometimes, a squid needs to get out of the water altogether. So they take off and fly.” [August 2, 2010]. How fast. Well it’s Olympic medal class speed – more than 30 metres in 3 seconds according to Japanese researchers. Usain Bolt won Gold in 2012 zipping along at 10.31 metres per second. The Japanese flying squid (Todarodes pacificus) can do 11.2 metres per second.

When the flying squid occasionally land on deck, they deliver the ship’s cat a “heaven-sent” feast and provide tasty dietary variety. ◈