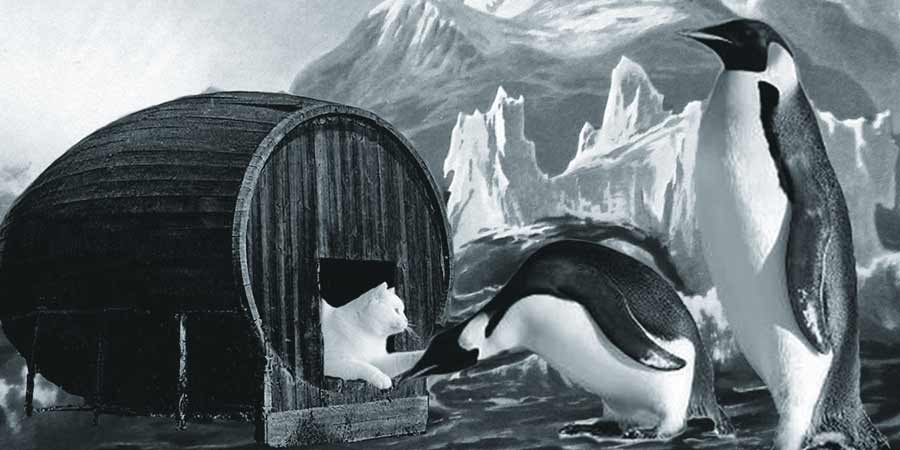 Fur and Feathers is an extraordinary tale of South Shetlands sealing, shipwreck, survival, and the Cora’s ship’s cat buddying up to the local penguins. You couldn’t invent this says Able Sea-cat Bart, story curator of seafaring felines, the sailors’ pest controllers, shipmates, mascots and pets.

January 1821 — “After the loss of the Cora a tent was constructed of sails and other materials the great part of which consisted of 4 lines of puncheons in form of a square, the heads of the inside ones being taken out so that two men could stand in and sleep, both warm and dry, one of these which was to spare was taken possession of by the Cat, and two Penguins one day came up out of the water and took up their stations alongside of her in the cask, they neither minding the people in the tent or the Cat, nor the Cat them.” 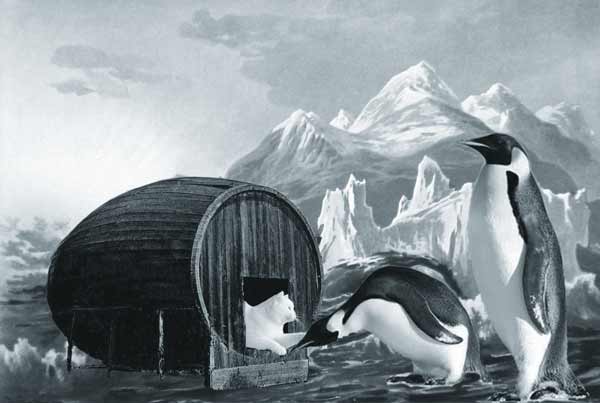 “Poor shipwrecked puss used to sit purring alongside them apparently comfortable and pleased with their company. These penguins used to go to sea for hours and as soon as landed again would make direct for the tent and get into the cask. The crew would sometimes to plague them endeavour to keep them out by keeping the tent shut but they always found a way to get in by getting under the canvas. In this manner did they stop with us until we left the coast.” ◈

puncheon
A barrel, a container for wine and/or spirits.
CREDIT Captain Robert Fildes, Journal of a voyage kept on board brig Cora of Liverpool bound to New South Shetland, 1820–1821.
ILLUSTRATION Ad Long

A currawong flew into coz Silkie’s life. One spring she dropped by to pick up his leftovers for her fledglings and hung around. “She never invades my personal space,” he said “we rub along”. I understand that. I’ve had some surprising buddies over the years – dogs, monkeys, parrots, goats. We tend to do our own thing most of the time, and on common ground we get on as best we can. It’s no “Zootopia” pet fantasy. It’s good old live and let live peaceful coexistence. And sometimes it’s just a bit of company. I’m not at all surprised “poor shipwrecked puss” purred when those penguins (Adelie’s I’d guess) dropped by. There he was stuck in a tent on Desolation Island (South Shetlands) day in day out. Captain Fildes was no fun. He shot out of bed at the crack of dawn and headed off to do all that mapping and charting and naming places he became famous for. And the beach was taken over by sealers plying their ghastly trade. As for who invaded whose space – I have a niggling feeling that what the Cora’s crew thought was a pile of rocks and a good place to pitch a tent was actually the penguins’ nest.  ◈

It was once common practice for ships to set sail with a variety of animals. Sailing ships carried cattle, pigs, goats and poultry to provide fresh meat, eggs and milk on board on long voyages and sailors had pets. The animals not only provided entertainment on board, they made good copy for daily newspapers as this 1892 New York Herald story shows.

“The sailors, particularly those on board our iron-clad men-of-war, are very partial to having pets at sea with them. This custom is not commonly forbidden by the commanding officers, for the life of a sailor is at best but a lonely and monotonous one, and he requires the companionship and recreation that are afforded by the presence of some animal. Some one of these pets is usually the favourite, and is acknowledged by all, from captain down to cabin boy, as a mascot.

The mascot of the Baltimore is a goat. When she was put in commission he was duly entered on the vessel’s papers as “William Goat”. He is an old salt, having been in Uncle Sam’s navy since he was a kid. He will only consent to go ashore when the first cutter is lowered for “His Goatship” and he listens to the service every Sunday morning in as exemplary a manner as any of the other tars.

On board the Richmond at one time a hog was kept as a mascot. He had a bath every morning and always presented a neat appearance. His principal amusement consisted in pacing the deck with all the precision and dignity of an officer of the guard. He became almost too fat to move and was allowed to die a natural death. The sentiment of his shipmates is well expressed in these lines:
As for eating a rasher
Of what they took pride in,
They’d as soon think of eating
The pan it was fried in.

Monkeys are very common on board ships plying in tropical and semi-tropical waters. The Yorktown, the Yantic and many other ships carry mastiffs. Some carry cats, and Cape pigeons are pets on the vessels of the Pacific squadron. The Chicago, the flagship of the white squadron, has a pet parrot that has one very had fault for a sea-going bird. It has learned several words of command, and can imitate the voice of nearly every officer on board. Its delight is to yell out, when the men are at dinner, “All the first cutters!” – and accompanying the words with an excellent imitation of the boatswain’s pipe – and see the crew come tumbling up from below.

When the Thetis was in the Arctic seas she had a seal for a pet, but soon tired of it. It would do nothing but eat seven meals a day, bathe in is tub, and lie on its side to be scratched and petted. All attempts to educate it or make a learned seal of it resulted in most dismal failure. A similar effort on the part of the officers of the Bear, who tried to make a pet of an Arctic bear cub which they had caught, resulted in a like failure. The cub allowed no familiarity of any kind, but would walk up and down the deck, looking straight ahead and growling and gnawing at everything that came in its way. ◈