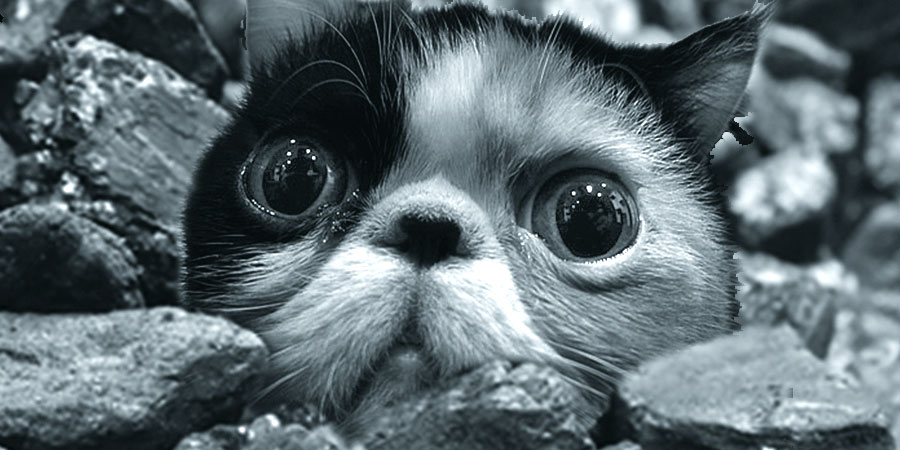 Able Sea-cat Bart highlights the problem of doors and hatches blocking essential patrolling activities in Curiosity Nearly Killed the Cat. Exploring and seeing what’s going on is what seafurrers do, he explains in a cautionary tale of seafaring felines, the sailors’ pest controllers, shipmates, mascots and pets.

Brisbane Daily Mail June 25, 1904 — That a cat has nine lives everybody has heard, but tabby is so tenacious of the first one that it evidently is not aware of the fact itself. The tortoiseshell mouse-catcher of the RMS Miowera has just furnished an example of what the feline can endure, and still escape a funeral. 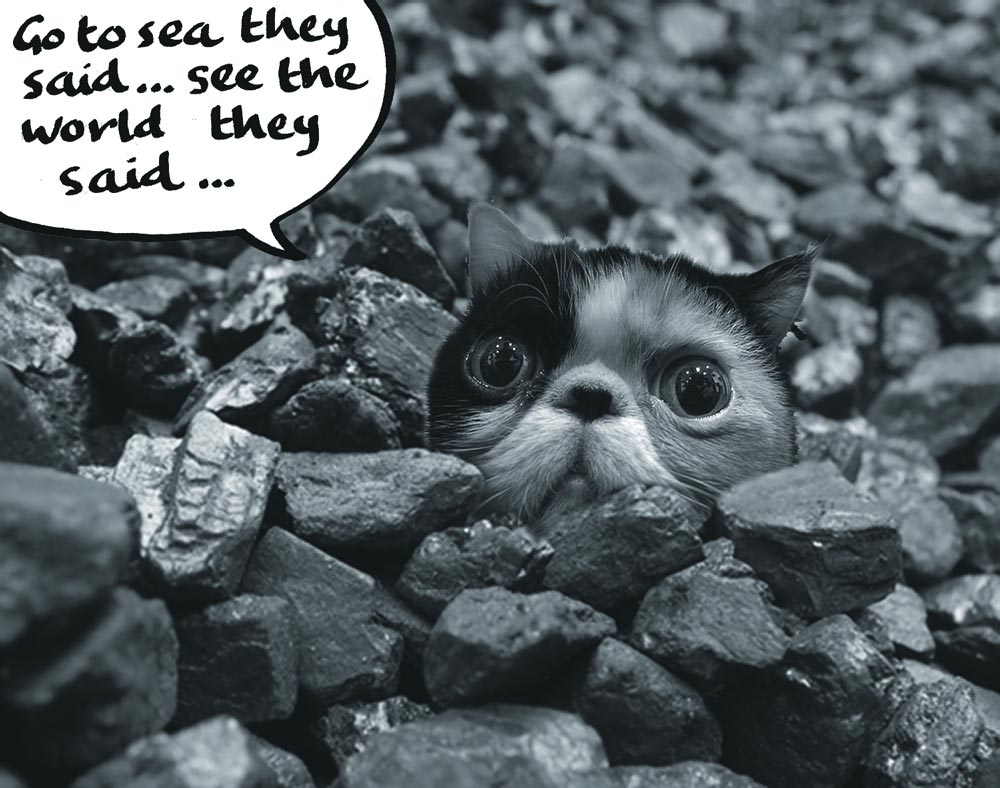 On the 11th of April the steamer was coaling in Newcastle, and pussy’s glossy coat was stroked by steward and the crew and the lumpers as it purred around and watched the coaling operations. Then it disappeared as completely as a flash of lightning. Unavailing search and expressions of regret followed, and then the ship’s cat was forgotten.

lumpers
Wharf labourers who handled cargo of all kinds. In the days of steam, some ports had special coal lumpers who lumped (shovelled) coal into the coal bunkers.

After the lapse of thirty-one days, however, and while the Miowera was plunging through the tropics, a stoker noticed something white jammed in some coal in the bunkers. It was the ship’s cat, emaciated, without hair, in the last stage of helplessness, almost blind, and covered with sores. It had been cooped up there for four weeks and three days without air, except what penetrated the coal heap, and without food or water, but still a spark of life left in it. This was fanned by the medium of weak whisky and water for two days, and then the cat began to take more solid food. It grew stronger daily, its tortoiseshell coat began to grow again, and it gradually returned to the tabby of old, and is still on the Miowera as great a pet as ever. ◈

The getting of wisdom

What a survivor story, and a real life one with a happy-ever-after ending and not a “so-called” reality show survival set up. Since Mr Tortoiseshell Tabby remained “as great a pet as ever,” it seems he took his near-death experience to heart and bypassed coal bunkers from then on. Good call. Nasty places for man and beast – hot, air thick with coal dust and the occasional fire spontaneously combusting.

There’s a saying that curiosity killed the cat. Well, let’s not curb natural curiosity. That’s part and parcel of seafurring and the getting of wisdom. However, Mark Twain does make a pertinent point when he says “we should be careful to get out of an experience only the wisdom that is in it – and stop there; lest we be like the cat that sits down on a hot stove-lid. She will never sit down on a hot stove-lid again – and that is well; but also she will never sit down on a cold one anymore”. That of course applies to all. ◈

Cats hate doors. It’s not perversity, it’s keeping options open. Doors didn’t feature in feline evolution. Desmond Morris puts the problem very clearly when he points out that the problem with doors (and hatches on ships), is they block a cat’s essential patrolling activities and prevent them from exploring their home range at will. “Humans often do not understand that a cat needs to make only a brief survey of its territory before returning with all the necessary information about other cats in the vicinity. It likes to make these tours of inspection at frequent intervals, but does not want to stay outside for very long, unless there has been some special and unexpected change in the condition of the local feline population” he says.

Early farmers must have cottoned on pretty quickly to the need to provide an access route (a hole in a wall) so the resident cat could head off on pest control duties or a tour of inspection. Humans sometimes found these peek holes handy spy holes. In Chaucer’s Miller’s Tale, a servant whose knocks go unanswered uses a cat hole to check out what’s happening on the other side.

An hole he foond, ful lowe upon a bord
Ther as the cat was wont in for to crepe,
And at the hole he looked in ful depe,
And at the last he hadde of hym a sighte.

Ships didn’t have cat holes or cat flaps because hatches and doors need to be watertight. Or as watertight as possible, especially in bad weather when it was vital to secure all deck openings to prevent water getting in. This is where the saying “batten down the hatches” (“prepare for a dangerous situation”) comes from. Admiral W. H. Smyth puts it this way in The Sailor’s Word Book (1867): “Battens of the hatches: Long narrow laths (strips of straight-grained wood) serving by the help of nailing to confine the edges of the tarpaulins, and keep them close down to the sides of the hatchways in bad weather.” ◈