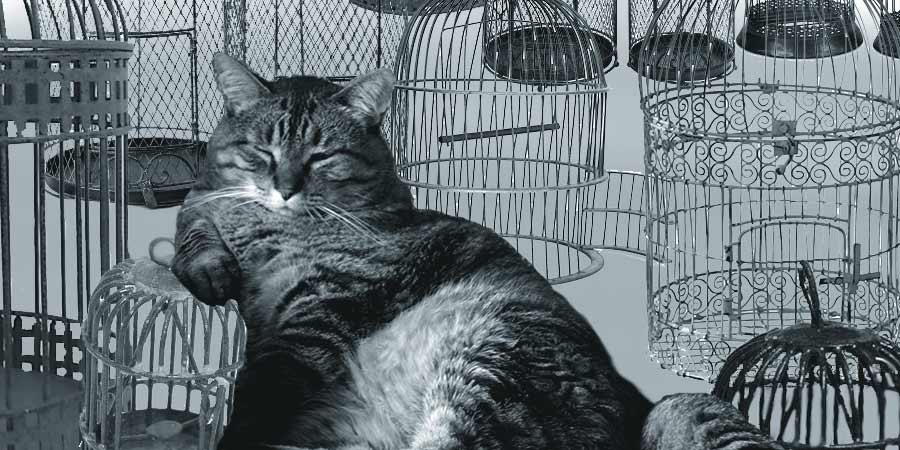 In this Disney-worthy cat and canaries classic, it took six men to keep ship’s cat out of a hold with 40,000 canaries. A shipping news tall tale reckons Able Sea-cat Bart, story curator of seafaring felines, the sailors’ pest controllers, shipmates, mascots and pets.

New York Times 11 December 1906 — Some 40,000 canary birds from the Harz Mountains arrived here yesterday on the steamship Rhein, but the real story was in the troubles of Gretchen, the ship’s cat. It took six men to keep Gretchen out of that part of the ship where the songsters were caged.

Twice Gretchen was ejected with force from the hold. The ship’s surgeon would offer no opinion as to whether Gretchen or the watchers lost more flesh. Late at night the Hoboken cats were gathering about the pier to welcome the new arrivals. ◈ 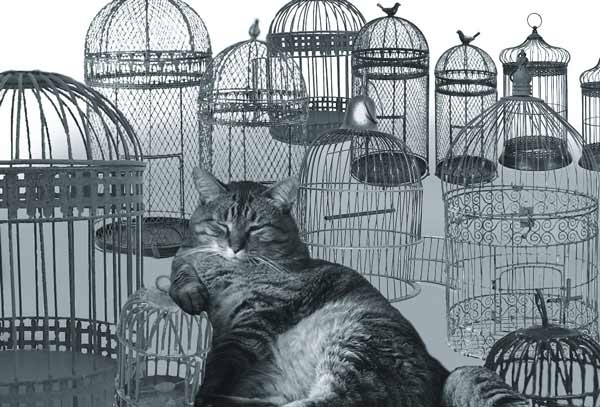 Northern Standard Darwin 16 January 1925 — Five thousand bullfinches and canaries, worth £10,000 were shipped at Hamburg in the Cunard liner Ascania. During that voyage from Hamburg two cats, one of which was Felix, the ship’s cat, managed to get at the birds, and accounted for 37 of them. ◈

A bird in hand?

Well this harks back to world with a more relaxed approach to import/export. You can’t just ship 40,000 caged birds around the world nowadays. Think biohazard and animal rights. But back on board back then it’s not as though those thousands of birds were sitting silently on their perches. After all, they are called “songsters”. I imagine any ship’s cat on watch would feel it their responsibility to check out where the din was coming from, before even thinking about the possibility of dinner. And there are some unanswered questions. The birds are in cages. So someone must have left a door or hatch open when they were cleaning the cages. For someone being paid for “escort” duty that’s sloppy. And of course what stories like this don’t tell us how many of those birds took off for the big, golden birdcage in the sky from natural causes on a typical transatlantic crossing. ◈

Katherine Grier in Pets of America says that “the US Department of Agriculture (USDA) kept importation records by 1906 when it reported the arrival of 322,000 cage birds, 275,000 of which were hardy European canaries. After World War I, bird importation climbed to 825,736 (562,980 canaries) by 1930.” Breeding canaries for sale was a lucrative cottage industry for the locals and by the twentieth century big business for the importers. The largest number of birds came from the Harz Mountains (between Berlin and Frankfurt). The birds were sourced by “pickers” and accompanied by “travellers” on the Atlantic crossing whose job was to land them healthy and in good voice.

The cage-bird trade was nothing new. “The practice of keeping live birds in confinement is worldwide and extends so far back in history that the time of its origin is unknown” writes Henry Oldys in Cage-Bird Traffic of the United States (1906). “It exists among the natives of tropical as well as temperate countries, was found in vogue on the islands of the Pacific when they were first discovered, and was habitual with the Peruvians under the Incas and the Aztecs under Montezuma. Caged birds were popular in classic Greece and Rome. The Alexandrian parrakeet – a ring-necked parrakeet of India – which is much fancied at the present day, is said to have been first brought to Europe by one of the generals of Alexander the Great. Before this living birds had been kept by the nations of western Asia, and the voices of bulbuls and other attractive singers doubtless added to the charms of the hanging gardens of Babylon, while in China and Japan the art of domesticating wild birds has been practiced for many Centuries.” 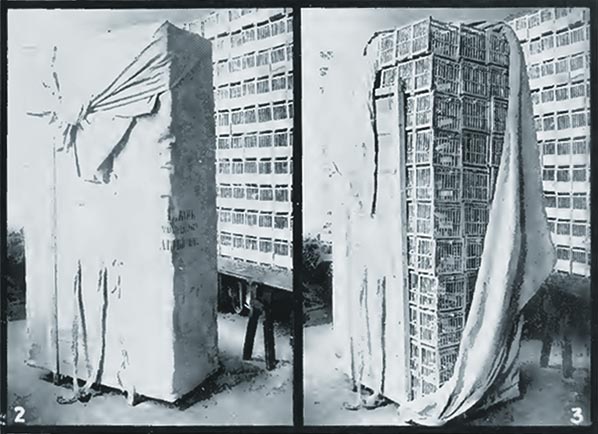 He also describes how the birds were shipped. “Canaries are confined in small wicker cages; seven of which are strung on a stick, constituting what is technically known as a row. When shipped across the ocean these rows are crated and a linen or burlap sack specially made for the purpose is placed about each crate. A crate usually contains 33 rows. To paraphrase the old riddle — every sack has 33 rows, every row has 7 cages, every cage has 1 canary (or sometimes 2 if the occupants are the more peaceable females). Often more than two dozen crates are shipped in one consignment. Each of these must be opened every day of the voyage, every row removed, and food and water placed in the cages. In this daily re-crating the rows are rearranged so that the benefits of outside positions may be more evenly distributed among the birds.” ◈